Store Home » Bigfoot Books » Tales of the Cryptids: Mysterious Creatures That May or May Not Exist (Darby Creek Publishing)

Tales of the Cryptids: Mysterious Creatures That May or May Not Exist (Darby Creek Publishing) 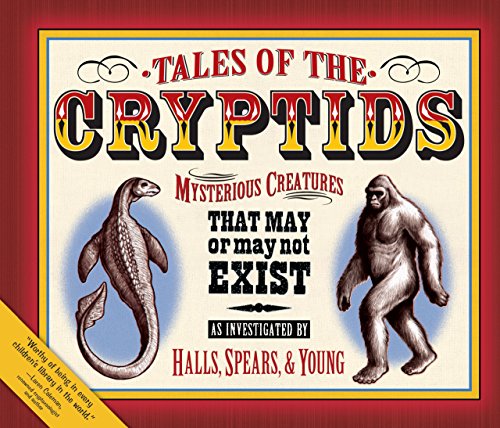 Everyone loves the stories of legendary creatures that just might really exist. This book relies on the latest information from cryptozoologists, experts who study these mysterious beings, and the counter-arguments are explored from experts who strongly believe they do not exist. Stories from eyewitnesses are recounted, as well. Included in the book are Bigfoot (Sasquatch), Loch Ness monster, Mokele Mbembe (Africa), Kongamato, Shunka Warak'in, Mapinguari (South America), giant squids, mermaids, coelocanthes, and more. An extensive "For Further Investigation" section, offering readers more places to find information, will conclude the book.
Buy Now

The Yowie: In Search of Australia's Bigfoot

Australia's most baffling zoological mystery! During the early colonial era, Australia's Aborigines often warned British settlers to beware of huge, ape-like creatures that lurked in the rugged mountains and deep forests of the island continent. Their people, they said, had been encountering the hairy horrors since time immemorial. They knew them by many names, including doolagarl, thoolagarl, jurrawarra and tjangara. Soon the colonists, too, began to experience hair-raising encounters with the hulking, foul-smelling creatures, which they referred to as "Australian apes", "yahoos" or "youries". Today, they are generally referred to as yowies. The list of modern-day eyewitnesses includes zoologists, rangers, surveyors and members of the elite Special Air Service Regiment. This book chronicles the yowie saga from the pre-colonial era to the present day. It contains over 300 carefully documented eyewitness reports and a vast amount of other data, much of which suggests that the damnably elusive creatures really do exist. The authors also critically examine the many theories that have been put forward to explain - or explain away - Australia's most baffling zoological mystery.

Bigfoot, Sasquatch evidence & sightings from Indian lore. Leave the civilized world behind as Raincoast Sasquatch takes you out into the rain-drenched forests of the Pacific Northwest on the trail of a living, breathing species of hominid, unlike any known primate today. Enjoy the mystery as you explore the existence of this elusive creature along the remote coasts of British Columbia and Alaska. Raincoast Sasquatch is an impressive collection of the first-hand accounts, historical reports and Native folklore that surround Bigfoot/Sasquatch. Sure to be enjoyed by believers and skeptics alike, this book will make you take a closer look into forests everywhere.

Bigfoot: I Not Dead

In his eagerly anticipated follow-up to Me Write Book, Bigfoot returns from exile to share his inspiring, hilarious, and often deeply disturbing experiences as a misunderstood forest gentleman and tragic media darling in a book that's the perfect gift for the Sasquatch in your life.These entertaining and often grizzly stories stand not only as a testament to the greatness of the legendary man-beast, but also as a chilling cautionary tale of the downside of a life of celebrity, cannibalism, celebrity cannibalism, wanton violence, and lack of toilet training. As in Me Write Book, full-color glossy spreads depict every intimate, disgusting, and downright insane moment of Bigfoot’s life. Bigfoot: I Not Dead is an unforgettable memoir that will stay with readers long after his foul scent has dissipated.