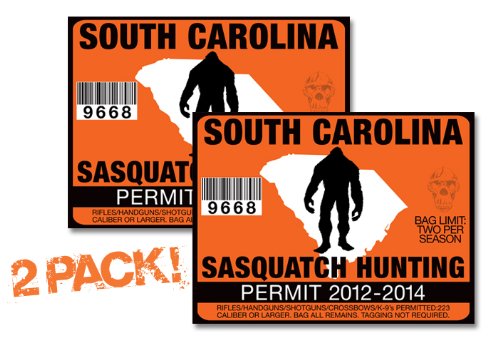 This blind is a perfect fit for just about anything you hunt. Providing great cover in both tall grasslands, as well as wooded areas, this blind is versatile and mobile if you need to pick up and move quickly. Using our BIGFOOT Camouflage pattern, it provides great concealment! Whether you're hunting fowl, deer, or other big game this blind is the answer you're looking for!This Tepee blind has plenty of space at 68 inches square and is 78 inches tall.Quick and easy deployment Stand up or use a shooting chair Provides for a dry comfortable shelter Anchors included to prevent it from being blown away in high winds Great for Nature photographers looking to get close to their subjects! BIGFOOT Camo's Tepee Blind 68 Square x 78 Tall, 150D with shadow guardEdge relief Window tie-downs Backpack carrying case

247 Skins Sasquatch Hunting Permits are made from Durable Triple layer Sticker material with a Crystal clear Over Laminate. Please don't confuse these with cheap, paper thin stickers manufactured by several home printers and sign companies. Permits are Easily removable without leaving a sticky residue. These decals are very Easy to install, have Vibrant Color and High definition detail. They are 5 year UV Resistant & Fade proof.

From the most ancient time of human existence, stories of strange man-animals have been passed down in legends and myth. These stories have been told in all parts of the world, and are remarkably similar. How could such stories be created, and why? Could the collective unconscious memory of humanity hold within it lurking shadows of creatures we once knew? Creatures that today exist only as legend and myth-could there be more-is there more? Fossil records firmly establish that once there did exist a giant ape-like creature called Gigantopithecus. Scientists have determined that this ape-like creature was between 10 and 12 feet in height and weighed approximately 1,200 pounds. This creature actually did exist, but no one really knows much more about about it other than its weight and height, and no one knows anything about its behavioral characteristics. Could it have been the ancestor to the sasquatch of today? no one really knows-nor does it matter. The simple fact that such creatures did exist at one time makes the possibility of ape-like giants existing today real. "Notes From the Field, Tracking North America's sasquatch" is a study into this issue, it covers ancient descriptions from different parts of the wotld and tracks this creature to modern times and discusses recent field discoveries.