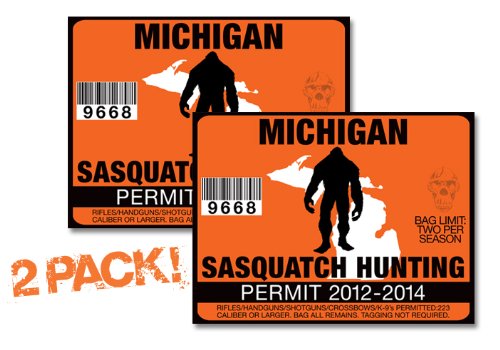 Finally you can pursue the most dangerous game in North America with a United States Sasquatch Hunting Permit. NOTE; This permit excludes the state of Washington...it's a felony there to kill a bigfoot there(seriously,...google it). Another original from Big Cat Sticker Shack. United States Sasquatch Hunting permit. This bumper sticker is printed on Weather resistant PVC Bumper Sticker Vinyl with UV resistant ink. Fade free for years.

Mankind is no longer the dominant species.When Harrison Kent suggests an outing to a remote campsite in Colorado, his friends are all eager for a few days of fun and adventure. What awaits them, though, is far more than they ever bargained for. They learn that Sasquatch is real, but these are not the shy creatures of legend. A madness has claimed them, erasing their once peaceful nature and leaving in its wake a ravenous horde of monsters that's about to descend upon the unsuspecting residents of a remote town. But the woods hold more than one secret. The cast of a low budget reality show is filming in the area and they have information that could even the odds. Harrison and his friends will need to team up with them for a desperate last stand against the rampaging beasts. Because if not, they’ll all learn what it truly means to be at the bottom of the food chain.----------If you enjoy Eric S. Brown, Max Brooks, or Steve Alten then you won’t want to miss this thrilling novel of backwoods terror.