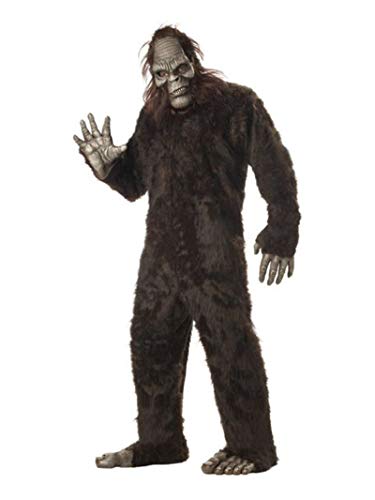 Big Foot's existence may not be confirmed but you'll have people thinking he's real when you show up wearing this costume. The Big Foot Costume is a great costume idea for men and women includes a hairy character mask, large feet with faux fur, and a faux fur bodysuit that is sure to send more than a few people running for the hills. You'll be sure to scare and amaze almost everyone you see on Halloween when you wear this outfit.
Buy Now 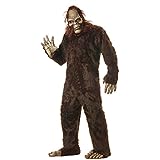 Bigfoot Plus Size Costume for Men Are you a big foot believer? Well, let's hope you are because according to our extensive research (a full half hour of getting side tracked on the world wide web) if you're not a believer then you're more likely to have a sometimes violent, usually frightening, and always ostracizing encounter with this woodland beast.Now, whatever you do, don't get this guy mixed up with the Yeti, that'll really make him angry and you'd better be sure you have enough beef jerky to placate him! For one, the Yeti lives all the way over in the Himalayas, a Yeti and Sasquatch have probably never even met before. Our Bigfoot likes warmer climates. It's been seen across rural America wandering next to the highway and through the woods by all sorts of people. The internet is full of accounts told by people from all walks of life telling their Bigfoot stories. There's even one about a police officer spotting one at the side of the road. Say what you will about hoaxes but in our humble opinion, all these witnesses can't be delusional!The most likely solution? Bigfoot is likely a customer of ours, wearing one of our quality costumes! Sure, it takes a lot of commitment to wander around in hopes that someone might spot you but everyone ought to have a hobby. In this furry jumpsuit, you would definitely stop traffic and drop jaws with the muscly chest, oversized paws, and believable mask. We do want to note that there's a lot of folks out there with gun sights aimed, ready to take a bigfoot down, so we really don't recommend wearing this costume out in the woods. It's a much better idea to wear this costume to make sure you win at that costume party you're headed to! 15 minutes of fame? Nah, you're going down in history with this bigfoot costume!